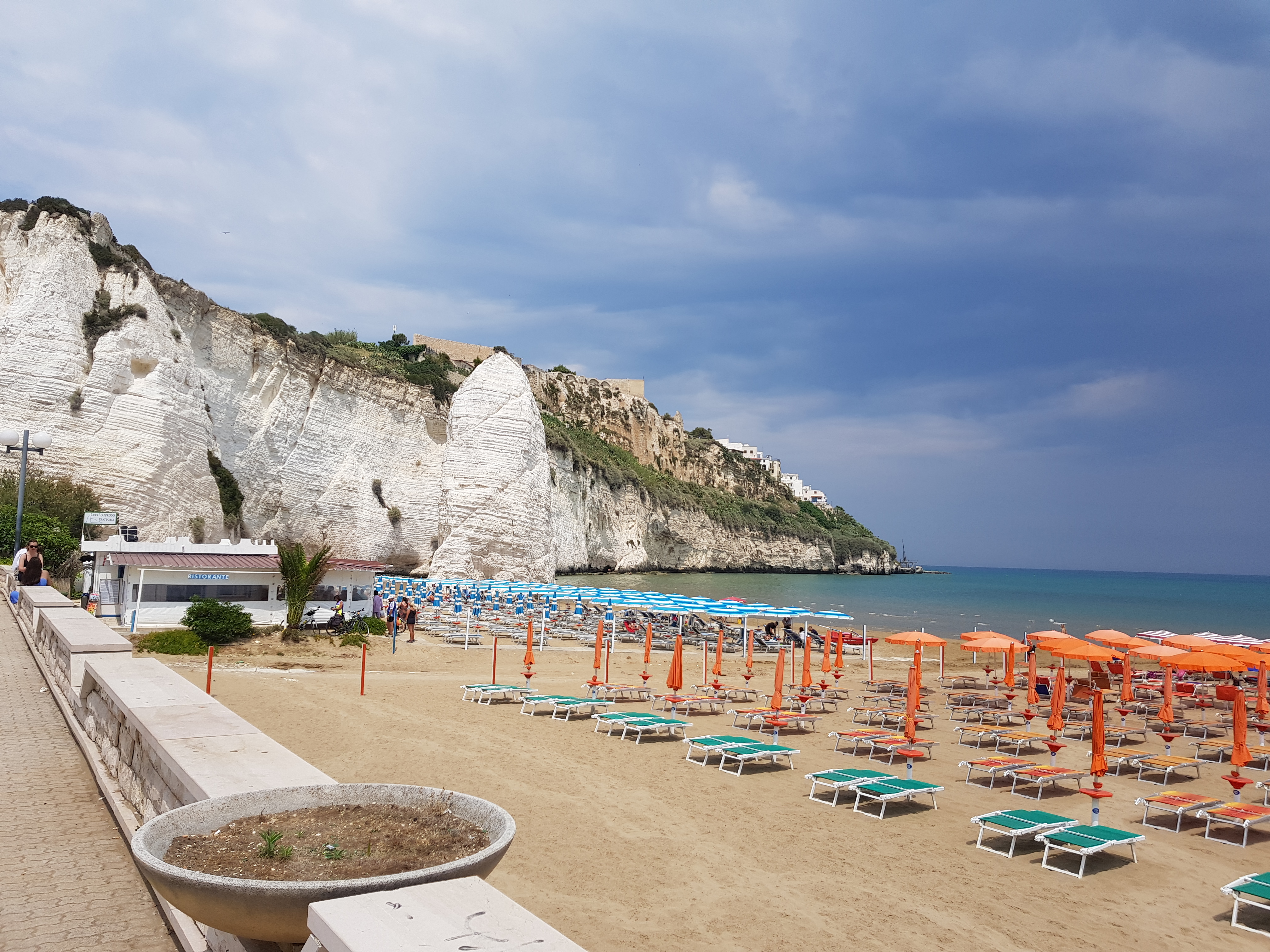 With a good night’s sleep behind us, and all memories of potato pizza banished, it was time to move on. This, after all, was a trip through Puglia and, as pleasant as it was, Francavilla al Mare isn’t actually in Puglia. Our destination was the striking clifftop town of Vieste on the Gargano peninsula. With Ruth rapidly acclimatising to the charming idiosyncrasies of Italian drivers, the habitual tail-gating soon became normal. The only minor concern came courtesy of the sat nav which decided to take us careering down a vertiginous track that was barely wide enough for the Captur let alone the giant RV that was making the turn as we exited back onto the main road.

Eventually we veered back towards the coast giving us a good view of Peschici, a town that seems to rear up out of the hillside as you approach. The road into Vieste offers no such grand vistas. Approaching from the south you’d be forgiven for thinking it’s an unremarkable coastal enclave with the usual assortment of shops and hotels. But as Betty (the sat nav) sternly guided us towards our destination, we caught our first glimpse of the white-washed old town, clinging impossibly to the headland. We were heading for the Hotel Cristalda which is located a minute’s walk from Spiaggia del Pizzomunno, the first in a series of beaches that starts at the base of the old town’s cliffs and stretches for 3km to the next headland. Pizzomunno is the name of the brilliant white 25m high limestone sea stack that erupts from the shore and is the official symbol of the Gargano.

Checked in and car dumped, we set off into the milky sunshine of the afternoon. A stroll out to the beach, past the craggy grandeur of Pizzomunno, and beads of sweat were already forming. This was exacerbated by the hike up the slope to the old town, which felt like an assault on the north face of the Eiger. Helpful brown signs coax you towards points of interest in Vieste and following one of these for the “castello” (unsurprisingly, the castle) we turned up Via Cesare Battisti towards an inviting stone archway. Hungry from the road we found the street-side restaurants too tempting to resist and after a furtive glance or two at the plates exiting the restaurant doorway we settled down at an unpretentious trattoria called Borgo Antico. This turned out to be a very happy accident.

Choosing a restaurant at random is often a good way to end up in a tourist trap. Not so in this case. In fact Vieste strikes me as the sort of town where even the tourist traps would serve a satisfying meal. My starter of squid stuffed with local cheese and chicory was a good way to dispel any doubts. The squid was tender and held together nicely, while the stuffing was rich and savoury with some underlying bitterness from the chicory. The accompanying red wine reduction and roasted tomatoes lent a nice acidity that cut through everything and rounded off the dish. This was exactly the type of food I was daydreaming about at my desk on some overcast Thursday in March. Bruschetta can be a wonderful thing. Toasted, garlic-rubbed bread, tomatoes and basil is the very quintessence of Italian food and Ruth simply can’t see past it. Here it was fresh and tasty although perhaps it could have done with a touch more salt. So far so good.

If the starters set a high bar the mains didn’t disappoint. I ordered troccoli ai frutti di mare which arrived steaming hot and loaded with clams, mussels and prawns. Troccoli, it turns out, is a thick, spaghetti-like pasta typical of the region and distinguishable from other similar varieties by its square cross-section. Everything about this was incredible. The pasta had that moreish bite to it, the seafood was tender and the simple sauce of salted pasta water, olive oil and garlic formed a delicious emulsion that coated the pasta perfectly. It required all my powers of restraint to take a respectable amount of time over it. Ruth went for a pasta dish of orecchiette alla Viestana. Orecchiette are small, flat pasta shapes, common in Puglia, that derive their name from their resemblance to little ears. The “Viestana” in the name of the dish refers to the use of local cacioricotta cheese, a Pugliese variety that falls somewhere between a firm cheese and soft ricotta. Roasted cherry tomatoes finished things off and made for a delicious but incredibly rich plate of food. A couple of coffees brought the bill to a paltry €35. Ridiculously good value.

With food in our bellies there was nothing for it but to explore and Vieste’s medieval centre is perfect for a bit of aimless roaming. The town seems to emerge almost organically from the rock and there are tiny courtyards with inviting cafes dotted around just waiting to be discovered. You’ll find yourself descending into alleyways before climbing back up gently sloping streets in search of something familiar. Don’t be surprised if you walk in circles. The focal points here are the Puglian-Romanesque Cathedral and the medieval castle. I wish I could tell you how wonderful the cathedral was but if I’m being brutally honest I’ve seen my share of Italian cathedrals and this one doesn’t exactly stand out. Dramatic ceiling frescoes and beautiful paintings of biblical scenes sit incongruously alongside coin-operated electronic candle machines; the faithful trust God with their souls but not, it would seem, a naked flame. You can wander up to the the medieval castle, but don’t expect a guided tour. It’s used by the Italian military these days and is only open to the public on select dates, which seems a bit of a shame.

Bar on Via Pola

After an afternoon roaming the alleyways and backstreets of the town, it was time for a short hotel stop to freshen up before heading back out into the evening. This is when we really fell in love with Vieste. The setting sun turns the bleached white cliffs a dazzling orange and locals and tourists alike emerge for the passeggiata. This social ritual is something you’ll see repeated the length and breadth of the country. More than just an evening stroll, the passeggiata is an important part of life in Italy. It’s the opportunity to meet up with friends, exchange gossip, show off a new baby or to simply just be seen. The more mature among them sit on benches along the route, taking in the sights and scanning the crowds for some gossip. Vieste had a pleasing murmur of humanity about it in the early evening. The sense of community was palpable and it’s something that doesn’t seem to exist in our damp, northern European towns. I think it’s fair to say the passeggiata works because the weather allows it to. Our own wander took us as far as a bar on Via Pola overlooking the bay. It was a beautiful spot to sit and watch the promenading locals in their finery while enjoying a drink. With the sun dipping below the horizon and a slight breeze picking up, we joined the throng and descended down the hill to Piazza Vittorio Emanuele II in search of dinner.

Having gambled on Borgo Antico earlier in the day we felt lucky enough to try and repeat the trick. After scanning the uninspiring menu boards of several restaurants, a small place up a side street caught the eye. It offered only two set menus of meat and fish. If that’s all they do, we thought, it must be good. Piccolo Ristori is an unassuming place. Tucked discretely up Via Dottor Giuliani you could be forgiven for overlooking it in favour of some of the more polished looking spots on the main drag. And that would be a shame because you’d be missing out on some simple, tasty, if unspectacular food.

We both went for the meat set menu which kicked off with bruschetta. Thick, crusty bread with that familiar topping of chopped tomatoes and basil leaves. This was served alongside a generous portion of ricotta and grilled, salted courgettes. The ricotta was creamy yet light while the courgette ribbons had a smoky char to them from the grill. I could certainly have eaten more. Probably for the best that I didn’t, because next up was orecchiette bolognese. I’ve no idea if this is considered to be the “correct” pasta for bolognese, but I don’t really care. It worked well and the little discs of springy pasta formed pools for meat and sauce to mingle. The ragu was rich with a pleasingly deep tomato flavour. Not a home run by any means but an above average bolognese. Next we had the ominously vague “carne alla griglia”, or grilled meat. The meat in question turned out to be veal, thinly sliced, well seasoned and seared to perfection. Served with a lemon wedge it was simplicity itself but no less tasty for it. The accompanying dressed salad was unremarkable and sat on the table sadly neglected.  It’s fair to say that this was a meal to be judged as a whole. There were no stand out elements but it was a series of consistently decent dishes served efficiently if not all that cheerfully for the bargain price of €16 per person, including wine.

Fed and watered once again we rolled back down the hill, past a now brightly illuminated Pizzomunno to the Hotel Cristalda. A workaday hotel with a comfortable bed, guest parking and a great location, it was good value and did all that we required of it. Vieste had been good to us and I could happily have spent another day here, but the road was calling once again. Tomorrow we’d head further south and inland, to Alberobello, smurf houses and a million Japanese tourists.