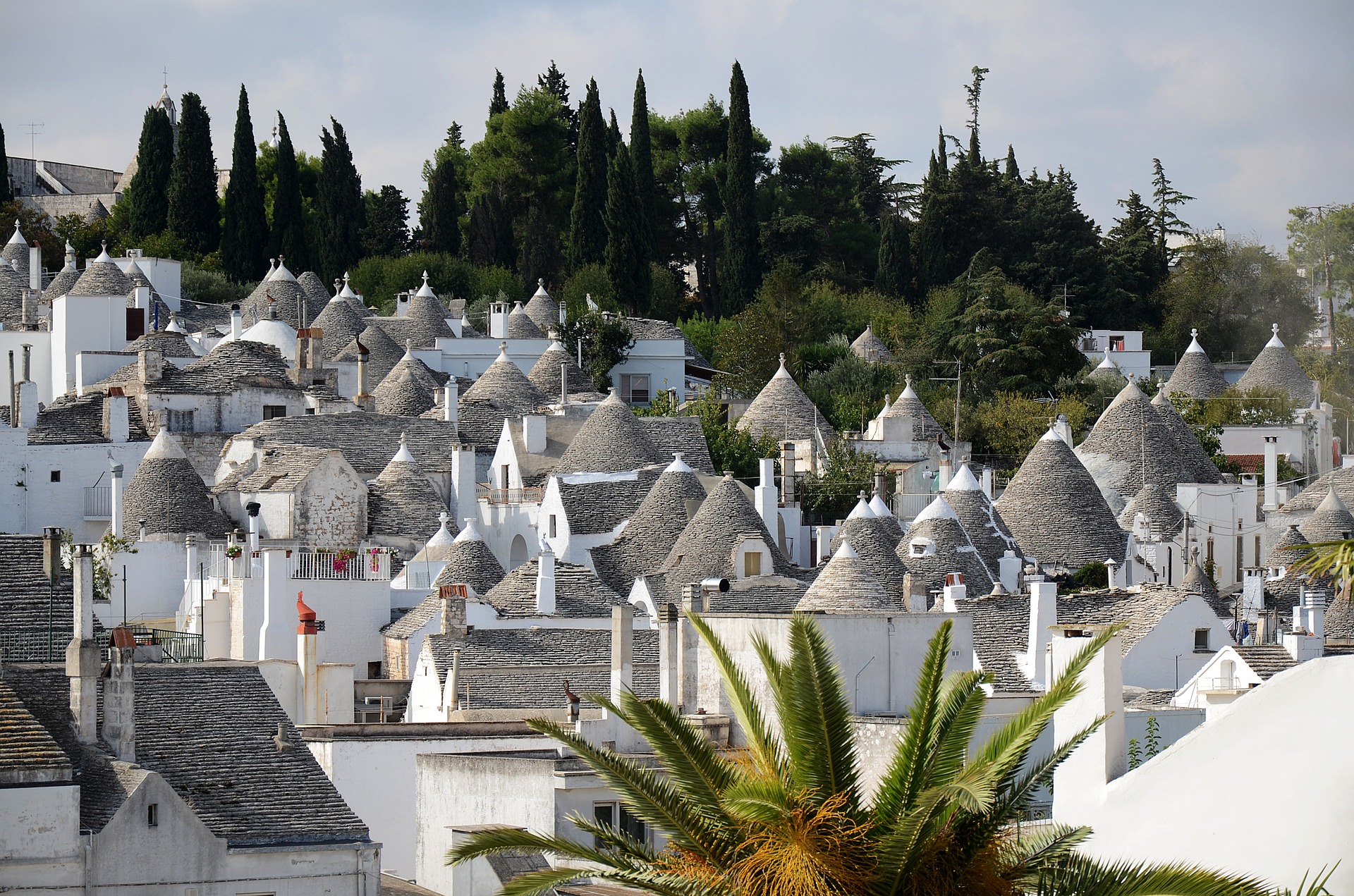 Vieste, for all its obvious charms, isn’t exactly a typical destination for visitors to Puglia. It’s difficult to get to and, beyond the superficial pleasures of its beaches and whitewashed old town, there’s not a great deal to draw you there. So as we left in the building heat of the late morning sun, thoughts turned to our next destination and somewhere a little more conventionally tourist-oriented.

Alberobello is famous for one thing: trulli. These beautifully quirky, conical-roofed stone structures were once used for agricultural storage and as rural dwelling houses, and utilise an ancient morterless construction technique. They can be found throughout the Itria valley and as we drove southwards one or two punctuated the landscape. But before long they were a regular sight. Whitewashed and often with multiple domes, these pretty little houses were a picture postcard reminder of why we’d come to Italy’s heel.

So as we rolled into the car park of the Grand Hotel Olimpo, we were keen to get going and explore. The hotel is around 5 minutes from the historic centre of the town, up a slight incline, and is apparently very popular with busloads of tourists. And so as we set off to discover the trulli we did so behind a column of Japanese visitors, uniformly covered head to toe in defiance of the fierce Puglian sunshine. I had 9 months of vitamin D to cram into two weeks so the milky white arms and legs were out in all their retina-searing glory.

The descent into the town was sweaty and energy-sapping but by the time we’d reached Largo Martellota in the centre it was obviously, spectacularly worth it. Rising up to the left from that wide central artery were cobbled streets crammed with trulli, each competing with its neighbour for the wide-eyed adoration of the crowds. There are countless trulli in this region, but nowhere are they gathered in such numbers as Alberobello. A single trullo is captivating but an entire village of them is other-worldly. These are now shops, restaurants, guest houses and people’s homes. They’re clustered together in such density that it’s difficult to tell where one ends and another begins. It almost made you forget the searing heat of the day and the calf-popping climb up the cobbled streets. Make your way to the top and you’ll find a small park alongside the Chiesa Sant’Antonio, a modern Catholic church in trullo form built in 1925.

As you lose yourself among the rustic charms of Alberobello’s trulli you could be forgiven for thinking it was ever thus. This Tolkien-esque townscape is so captivating that it seems impossible that there was ever a time when it wasn’t packed to bursting with eager travellers. But Alberobello’s rebirth as a tourist hotspot is a fairly recent phenomenon. In the early 90s the Monti area, where most of the town’s trulli are located, was largely derelict. Enter local entrepreneur and craftsman Guido Antionetta who saw the potential in these charming but neglected buildings. He started buying them up and installing some basic facilities, kitchenettes and fireplaces which allowed him to rent them out to what, at the time, was a slow trickle of tourists. By 1996 the trulli of Alberobello had been designated a UNESCO world heritage site and efforts to preserve and rejuvenate them were well underway. Today’s fairytale, whitewashed marvel is the culmination of thousands of hours of effort from then until today, and it continues even now.

Tottering carefully back down the cobbled sidestreets we found ourselves once again on Largo Martelotta. Lunch was an unremarkable one, simple salads with olives and bread. The location was more important than the food in this instance so we took our seats at Trattoria Largo Trevisani for a spot of people watching. This café sits on a small square directly facing the largest concentration of trulli and affords a great view of the bustling street. On this Saturday afternoon that meant tourists pounding the cobbles, traders selling fruit and nuts, and a bridal party roaring past in celebratory style behind the wheel of a Maserati.

A quick hotel stop and it was back into town for a beer, an Aperol Spritz and more people-watching. I love how Italian towns murmur into life as the sun slips lower in the sky and the stifling heat slowly dissipates. Alberobello was no different. Rione Monti still hummed with activity as dusk fell. A jumble of conversations spilled from the myriad enoteche and trattorias lining the streets. I did a little research on where to eat dinner but any notion of seeking out somewhere in particular faded as we wandered among the trulli again.

So once more it was sheer luck that led us to La Perla dei Trulli. The outdoor courtyard was charming and the food was rustic, hearty and full of flavour. It does seem difficult to eat poorly in Italy. The house rosé frizzante was all too drinkable and came in convenient litre carafes while our hosts were good enough to set up a TV at the far end of the courtyard so we might enjoy the Champions’ League final. And as Mario Mandzukic hooked the ball over his head and into the far corner of the net there was barely a sound; the Pugliese of Alberobello clearly aren’t fans of their northern neighbours.

Gently woozy from the wine and with full bellies once more, we rolled back down the cobbled streets to Largo Martelotta. It was cool now and quiet except for the occasional staccato lamentation of a football commentator carried off on the breeze; Juventus were losing heavily. The short climb back up the hill to the Hotel Olimpo was a lot easier than it had been several hours and 20 degrees ago. Back in our quiet, modern and spotlessly clean room it was time for bed. Tomorrow we’d press on through Locorotondo, Ostuni and onwards to Lecce.