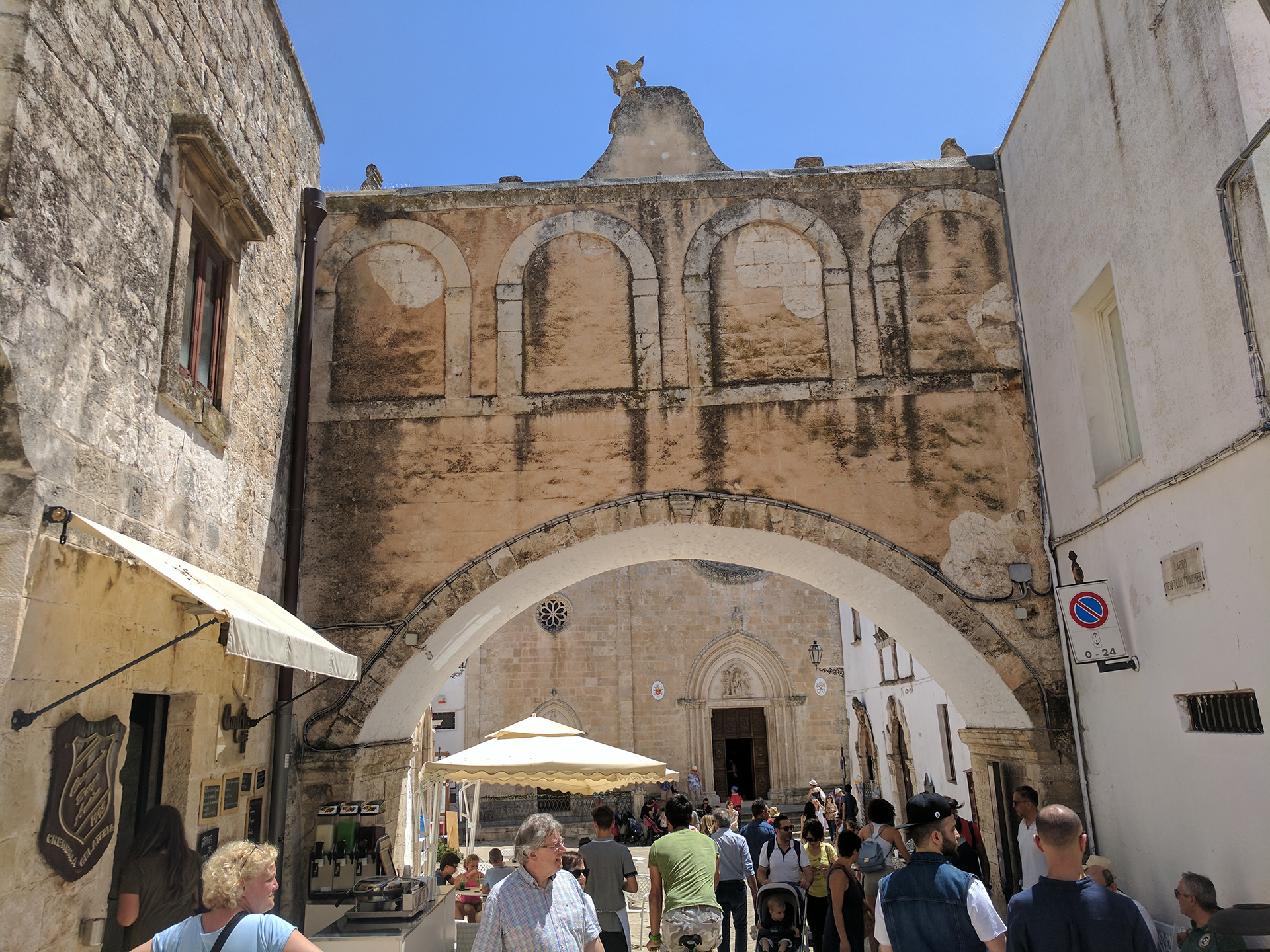 The road out of Alberobello was quiet on this Sunday morning. Italy is, after all, a predominantly Catholic country and here the Sabbath is more or less observed. Our destination today was Lecce, 100km to the south east. But between here and there lay sights worth seeing. Like many towns we’d encountered, Locorotondo has an outer ring of 20th century development radiating from a central historical district (look for “centro storico” on your map).

Car parked, we ascended the steps up to the inevitably whitewashed old town for a mooch around. The spiral streets took us upwards to Piazza Vittorio Emanuele and a small park with views to the plain below. It was Sunday and here, as in countless squares across Italy, old men gathered beneath the trees to keep cool and set the world to right. The church bell tolled, announcing to the faithful that it was time to come inside and take mass. Children in their best clothes clattered across cobbles in stiff shoes and old ladies shuffled through heavy church doors to prayer and redemption. Locorotondo is a pleasant place to pass some time. The town’s warren of streets and alleyways feel like they were put there simply to get lost in.

As much as it would have been nice to linger, we pressed on. Ostuni lies 25km to the east of Locorotondo and, but for a chronic shortage of affordable accommodation, we would have been spending the evening here. Sadly we were reduced to a whistle stop tour that didn’t fully do justice to this beautiful and ancient city. That same belt of modern sprawl that afflicts all historical cities is present in Ostuni and it seems thicker and even less navigable than normal. Tentatively navigating the outer limits we somehow manage to park on the street right next to Viale Oronzo Quaranta, the sweeping promenade at the base of the northern walls.

With no plan in mind other than to see the place, we huffed our way up countless flights of steps to the town proper. It should be noted that when I use “modern” and “old” these are relative terms. Much of the development that encircles the fortified old town is already pretty old, but Ostuni’s historic centre feels truly ancient. Claustrophobic passages lined with giant polished flagstones lead you ever upwards until you emerge into brilliant sunshine. Quite by accident we found ourselves standing in front of the Cathedral of Ostuni, or Concattedrale di Santa Maria Assunta to give it its Sunday name. It shouldn’t come as a surprise to learn that the streets were heaving with tourists. As well as the constant flow of day-trippers like us there’s a huge summer migration to the city, swelling the population from its off-peak level of 30,000 inhabitants up to 100,000. Right now they all seem to be congregating in front of the cathedral taking pictures. Weakened by the climb we decided to take a seat and enjoy the scene with a granita. There are some grade A people watching opportunities in Ostuni. Throngs of excitable visitors wielding cameras worth more than a small car jostle for territory, seemingly unaware that the perfect moment they’re desperately trying to capture is happening right now. I feel momentarily inadequate as I take a few snaps on my phone.

Ostuni is worth more time than we’re able to give it. But Lecce is still 60km away and that innate desire to get where we’re going kicks in once again. The journey to the south and east passes without incident and we arrive at our hotel on the outskirts of Lecce. The Grand Hotel Tiziano is a modern-ish block situated just outside the city walls. This is a conference hotel and about as far from the rustic Puglian idyll as you can get. But a free upgrade to a superior room and a swimming pool by which to enjoy the late afternoon sunshine more than made up for that.

Our first venture into Lecce took us along the western boundary to Porta Napoli, a spectacular 16th century triumphal arch marking one of three entrances into the city. Once we’d passed through, the noise of that busy ring road receded to nothing and we wandered the narrow streets. For once I knew where I was heading. It was lunchtime and Italy knows what to do with bread, meat and cheese. La Prelibatezza G & C looks humble but they specialise in a Puglian sandwich called a pucce. This round pizza roll is stuffed with marinated vegetables, mortadella, sheep’s cheese, chilli oil and god knows what else. The end result is spectacular and owners Giuseppe and Christina were so friendly and very tolerant of my attempts to murder their language. Washed down with a local beer it was exactly what we needed after a busy day.

As a little of the fire went out of the sun  we returned to the hotel for some relaxation. The pool was eventful (more on that another time) and it was nice to just do nothing for a couple of hours. We’d head off into the city again later for dinner and more of that wonderful Puglian beer, but the pace was sedate and tiredness was closing in. It was best to get some sleep, because now we were down in Italy’s heel and a whole swathe of Puglian delights were within reach.